Top Activities & Things To Do, Plan Your Trip

The phantasmagorical mythology about the Aurora Borealis is justified by the vibrant images that float dreamily across Alaska’s ebony night sky.

The Alaska Aurora Borealis is an incredible sight you do not want to miss.

According to Science Magazine, Alaska is the best place in the world to see these wonderful lights, which is one more reason to book a trip.

That’s why we have a few easy steps to follow so that you, too, can be among the sky gazers who have seen the magnificence of the Alaska Northern Lights. Book Your Voyage to Alaska

This seems like an obvious step, but you can’t see Alaska’s Northern Lights without traveling to this marvelous, wild, and wonderful place.

Come on. You know you’ve always wanted to see "The Last Frontier,” so go ahead and make your plans. If you truly want to see the Northern Lights, they’re practically a staple of the deep obsidian Alaska night sky.

Even the scientific name – aurora borealis – is beautiful, portending something mystical and magical. They are a colorful, ethereal presence in the heavenly Alaska firmament that almost defies description.

Think of a watery sky with brilliantly multi-colored streams – blue/violet, bright green, ruby red – floating in the stratosphere. The brightly colored waves are constantly moving to create a hypnotic effect, and you can’t take your eyes off of the heavenly spectacle.

The word "awesome” is one of the most commonly overused words in the English language. But take our word for it, the Alaska Northern Lights are, well, awesome in the true sense of the word.

Don’t settle for celestial imitations elsewhere! The Aurora Borealis is the real thing!

Find out the Best Locations to see the Alaska Northern Lights

Pick your location to view the Alaska aurora borealis. You can view them anywhere there is not a lot of ambient light.

The Northern Lights are always present, but the best time to see them is late August to mid-April. Still, your summer vacation in Alaska will offer plenty of opportunities to experience this spectacular sight.

National Geographic says Fairbanks, Alaska is the best place in the United States to see this majestic show of nature. Fairbanks is two degrees below the Arctic Circle and is close to the amazing Denali National Park. (Anchorage also has an international airport, so it’s easy to get there.)

But locations like Skagway, Ketchikan, or Juneau are also fine places to observe this breathtaking skyward phenomenon.

Learn the Science Behind the Northern Lights

We promise this step will be both fun and fascinating.

Once you understand what causes the Northern Lights, you’ll come to appreciate their celestial meaning and significance to our planet.

If you don’t have time to check out astronomical journals, here are some crib notes.

The Northern Lights come from the sun. Think of it, our sun is about 91 million miles away, brightens our days, and provides life on Earth, yet it also treats us to a night light show like one you’ve never seen.

The Northern Lights begin on the sun’s surface when a cloud of gas explodes into space. This coronal mass ejection, or CME, as scientists call it, takes about two to three days to reach Earth. When this solar mass collides with Earth’s invisible magnetic field in the upper atmosphere, it generates changes in the magnetic field that cause oxygen and nitrogen atoms to light up and cause the eerie and ghostly images that flow along with magnetic fields.

Now that you’re familiar with the science behind the aurora borealis, you can really appreciate what you’re seeing.

The Northern Lights Can Only be Seen During the Night

You’ll want to stay up late viewing the Northern Lights, which last well into the wee hours.

We know napping is hard when you’re visiting Alaska. There is so much to see and do that a siesta feels like you’re wasting valuable time. The mountains, the seas, the rain forests, the shops, the totem poles, the exotic wildlife and the remarkable people with their amazing stories can make for a full and fun day.

But you’ll want to spend a lot of time marveling at the night sky. The best way is to take a daytime snooze so you don’t miss one of the most memorable sights in the world.

The Aurora Borealis usually appear between 5 p.m. and 2 a.m. and may last as long as 30 minutes.

If you’re a night owl, fine by us. But many of us will need some shut-eye if we’re going to be up half the night to take photos, share the experience with friends, or simply gaze in amazement at the changing shapes and colors. 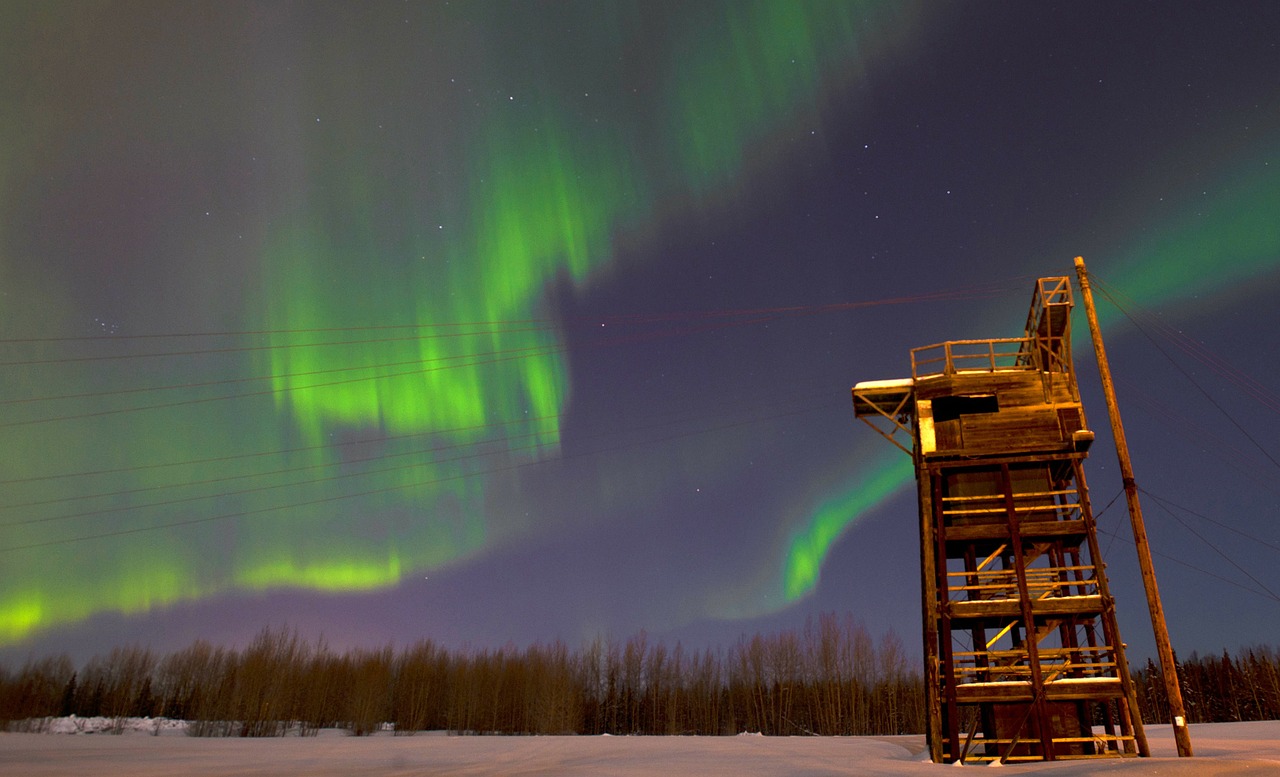 Look up at the Sky

You will need no prompting to gaze upward. The Northern Lights can fill the sky from zenith to the horizon.

You’ll want to document the experience, too, so take a lot of photographs. Although photos can’t really capture the drama of this nighttime spectacle, most smartphones can grab some terrific images.

But don’t just stare through your phone lens.

Stand there, look up and enjoy the moment.

A Few Fun Facts About the Northern Lights

Impress your friends with these tidbits of information while you tell them about your Alaska Northern Lights experience.

Beautiful though they may be, the Northern Lights consist of magnetic particles that can be bad for the electrical grid and satellites. Scientists are working to understand the physics behind them so that they can better predict how this phenomenon will affect technology.

The Northern Lights float around at altitudes of up to 400 miles above Earth.

The Aurora Borealis has been seen as far south as the Equator. But you’re better off going to Alaska to see the show as the Equator is not nearly as likely a place to view this magical show.

During auroral storms in August and September of 1859, February 1958 and March,

Now that you’re an expert on the Northern Lights, follow these five easy steps to a glorious sight in the Alaska sky – and enjoy!