But nothing is more symbolic of "The Last Frontier” than the towering Native Alaskan Totem Pole.

Created by the First Nations of the Pacific Northwest, totem poles are stately, soaring, carved representations that celebrate significant people, history, places, and things in Alaska Native Alaskan tribal culture. The word, "totem” is a reference to a guardian, ancestral being, or another supernatural being, but totem pole symbolism also serves as a reminder of significant events. The Native Alaskan tribe known as the Tlingit calls the totem pole "kooteeyaa,” meaning "people of the other side.”

The Native Alaska Totem Pole is a colossal presence on Alaska’s landscape. Each pole is unique and tells a story of its own, commemorating tribal legends, myths, and family legends with totem pole symbols carved into a red cedar log.

Totem poles, which are considered sacred but usually are not worshipped by indigenous peoples or even considered religious symbols, can represent events like births, deaths, and marriages as well as people, animals, and spirits. Totem poles are revered by Native Alaskans and there are at least six different kinds.

The Shame Pole, for example, targets weak leaders and those who failed to fulfill an obligation or repay a debt. Quarrels, murders, and other nasty acts and occurrences are also immortalized on the Shame Pole.

Imagine the ridicule and chagrin you would feel if your indiscretion was memorialized on a 70-to-100 ft. structure that will last 60, 80, and even in rare cases 100 years.

The five other types of Native Alaskan Totem Pole are far less onerous but no less compelling.

The types of Native Alaskan Totem Pole are:

What is the Meaning of a Native Alaskan Totem Pole? 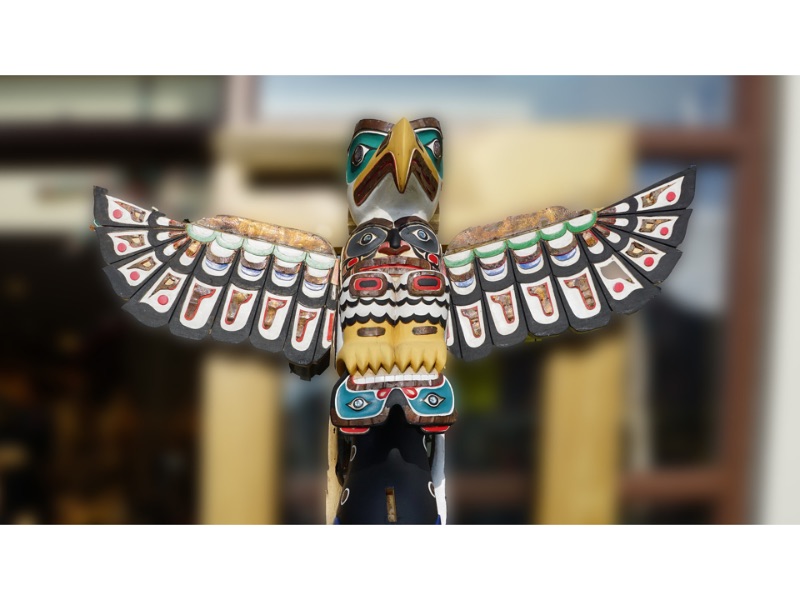 The answer is a bit complicated. The meaning of a pole is often a mystery to outsiders and is only known to the Native Carver, those who commissioned the poll, and those present at the pole raising. But even without knowing the exact meaning, what you have in a totem pole is a dazzling monument full of Native Alaskan art and history as told through totem pole symbols.

Each totem pole is original. Totem pole symbols include images such as ravens, eagles, owls, fish, frogs, beavers, bears, plants, and people. The history of totem poles goes back centuries, but since few totem poles have survived from before 1900, it is difficult to trace their exact historical dating.

The socio-cultural roles of Native Alaska Totem Poles are powerful, and the raising of a pole is usually celebrated with a ceremony and a feast. During the raising ceremony, stories of totem pole symbols, which often include a family crest, are told after the pole is raised.

In other words, a Native Alaska Totem Pole is more than a fancy decoration. It’s a highly important signpost of tribal culture.

How is a Native Alaskan Totem Pole Carved?

Carving is always done by hand with no power tools involved, except for a chain saw used to make the large initial cut of the single log used for the pole. Carvers are trained to create their own tools, using tree branches to carve a handle and forged steel to create a blade.

The design of Native Alaskan Totem Poles is usually first sketched on paper to allow the carver to know how tall each figure on the pole should be. The sketch also guides the carver to know how tall the log for the pole should be. Before the carving begins, the red cedar logs used for the poles are stripped of their bark and the saproot is removed. Once dry, the log takes on the consistency of balsa wood, making it easier to carve.

The carver slices and chisels symbols into the wood that might include inanimate objects such as animals or mythological beings as well as symbols of tribal history. It takes about nine months to complete the pole.

Except for details that bring figures to life, such as ears, eyebrows, lips, and feet, Native Alaskan Totem Poles are never fully painted, largely because of the extensive labor involved with painting. Indeed, to make paint for a totem pole, female members of the tribe chew salmon eggs and spit them into a bowl. After the masticating and spewing, a base for the paint is formed and then mixed with powder to create the four main colors of the poles.

Colors of the totem poles are usually black, coming from charcoal or lignite; red, from iron ore; turquoise from copper oxide; and white from clamshells.

Native carvers are artists who pass their craft down through generations to preserve the enduring and important legacy of Native Alaskan Totem Poles. One of today’s most prominent carvers is Alaska native Nathan Jackson. Jackson, who has been carving for about 60 years, is known worldwide for his carvings in the traditions of the Chilkoot Tlingit tribe.

Here's Where You Can Find Native Alaskan Totem Poles

You can see Native Alaskan Totem Poles in most Southeast Alaska communities, including an amazing display in Sitka National Historical Park. Other spots to view totem poles include the Alaska State Museum in Juneau; the Totem Heritage Center and the Totem Night State Historical Park in Ketchikan; and the Totem Park in Saxman. You can also view Native Alaskan Totem poles at art galleries and other museums across the 49thState.

How Much Does a Native Alaskan Totem Pole Cost?

By now you probably want to price out a Native Alaskan Totem Pole.

Remember, Native Alaskan Totem Poles involve a great deal of labor and intricate detail, not to mention materials, which make them something of an investment. The average cost of a totem pole is about $2,000 to $3,000 a linear foot, plus the cost of the log. Some can cost as much as $60,000.