How are gold nuggets formed?
Gold is formed in quartz deposits deep within the earth. When erosion takes place, exposed veins of gold break off and wash into rivers and streams. The natural movement of the water tumbles the gold against sand and rocks, forming gold nuggets. Sand and rocks dull the nuggets and a slight cleaning is needed to bring out the brilliant color. Over time, each nugget develops its own texture, shape, and character, making it unique. Other precious metals, like platinum, form nuggets in the same way.
Gold can be removed from the earth in several ways. Hard rock mines extract veins of gold from solid rock and placer mines extract gold on the surface in sand or gravel after the gold has been released from its host material and has accumulated in modern or ancient streams or glacial deposits. During the early gold rushes like the Klondike Gold Rush of 1898, it was common practice for miners to flock to an area and start prospecting for the easy-to-get placer gold in rivers and creeks using panning, and later sluicing and dredging techniques. Because gold is more dense than sand, prospectors worked by swirling a combination of water and gravel and sand in their pan and allowing the lighter rocky material to spill out, leaving just the gold. It was only after the placers became exhausted would hard rock miners trace to the source of the gold and establish hard rock mines at the vein. In Alaska, most of the gold found comes from placer deposits.
How pure are gold nuggets?
Gold nuggets are rare and when they are found by miners they are typically not melted but left in their natural form, unaltered by man. The gold purity of nuggets varies by geography and the composition of the original vein. Gold nuggets range in purity between 70% to 95%, with the average nugget being 90% pure, which is 22k (for comparison, 41% pure is 10k and 58.5% pure is 14k). Nuggets are not 100% pure because they are formed by nature and usually mixed with other precious metals, like copper, silver or nickel. Each nugget is unique and will have its own color, luster, and shine determined by its composition. The richer and deeper the orange-yellow color, the higher the gold content. 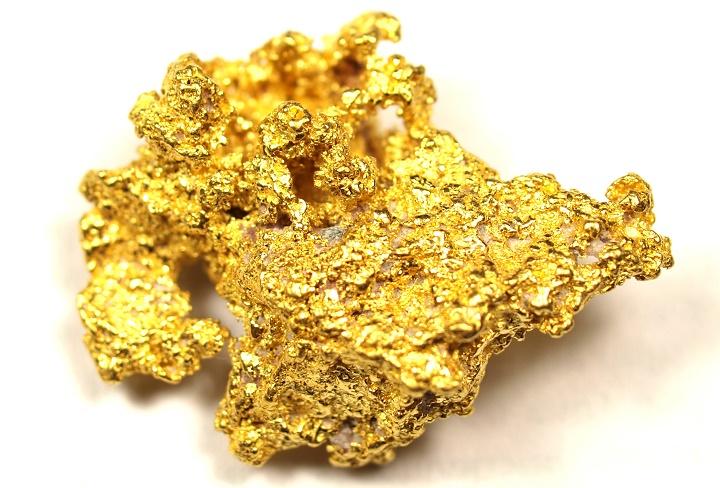 How much do gold nuggets cost?
Nuggets are weighed by the troy ounce (or the pennyweight (dtw): 20 pennyweights equal one troy ounce) and not by the avoirdupois ounce, which is the common measuring system for everything except precious metals. The troy ounce is a bit heavier than the avoirdupois ounce, with one troy ounce equaling 31.10 grams and one avoirdupois ounce equaling 28.35 grams. The weights are close, but the difference becomes noticeable when trading in larger quantities. Gold nuggets are sold at a premium compared to gold traded on an exchange because of their rarity. The larger the nugget the more rare it is. In this way, gold nuggets are similar to diamonds: a one troy ounce nugget is now considered as rare as a five-carat diamond.
History of gold in Alaska
Gold has played a big role in Alaska’s history. Even before Alaska was purchased from the Russians in 1867, there was evidence of gold. As early as 1849, P.P. Doroshin, a Russian engineer, discovered gold in the gravels of the Kenai River on the Kenai Peninsula and in 1861 gold was discovered on Telegraph Creek near the settlement of Wrangell. However, the Russians prohibited the search for minerals in the area as they feared a rush of foreign prospectors would flood the region, which they could barely hold claim to themselves.
The first big gold discovery following the Alaska purchase was in Juneau, named after Joseph Juneau, who was an early miner, in 1880. This discovery generated excitement for mining in the North and thousands of prospectors moved to Alaska in search of gold.
Perhaps the largest and best known gold rush in Alaska was the Klondike Gold Rush of 1898. In mid-July 1897 two steamships returned to Seattle and San Francisco from the Yukon carrying more than two tons of gold. This led to a nationwide frenzy and over the course of the next two years, 100,000 miners and opportunists flocked to Skagway and Dyea, Alaska on their way to Dawson City, Canada in hopes of striking it rich. Unfortunately, most of the claims were staked by the people who had been in the region when the strike was made, and many new prospectors returned disappointed.
Today, Fairbanks, Juneau, and Nome are responsible for most of Alaska’s gold production. Additionally, most current placer gold mines in the United States are in Alaska.
Orocal sells beautiful and authentic gold nugget jewelry and you can see the full collection on the Orocal brand page where you can also buy online.
Alaskan businesses that sell authentic, quality gold nuggets:
(1) Lynch & Kennedy in Skagway, Alaska
(2) Back Alley Rock Shop in Skagway, Alaska
(3) Mt. Juneau Trading Post in Juneau, Alaska Top 15 Souvenirs To Buy From Alaska Trish Pearson, owner of local Ketchikan company Fish Fro Trish, has a great eye for good fish, and she is highly selective, indeed “picky,” about the fish she chooses to sell. Ketchikan’s Rain Barrel gift shop is more than a warm and welcoming place to pick up handcrafted art, native artifacts, Alaskan carvings, native art, apparel and dozens of other items that make a trip to the store memorable. Rather than trying to turn everything into gold, Conner wants to turn gold into water for people in need around the world. Grant, a fourth-generation jeweler knows the miners personally and the jewelry manufacturing process, and he sees room for impr... “We sell an elite product for people who want to have the best, that’s what we sell,” Wilcox said. “I’ve compared reviews from our store to other stores and we beat the major brands. When women come into the store and sa... Jill Scheidt's Story Is A Quilt of Alaska

There is no high romance behind the founding of Abby’s Reflection Apparel and Quiltworks in Sitka, no dramatic dreams of massive success in the quilting and apparel business. I said to a friend of mine, ‘let’s sell some clothes,&rsq... Harbor Tea and Spice where they believe the ritual of drinking tea is almost as magical as enjoying the Juneau scenery. Denny Wong Finds Inspiration For His Unique Jewelry Wherever He Looks

Denny Wong is an internationally recognized jewelry designer. His philosophy of jewelry creation is reflected in his tagline: “Inspired by Nature. Perfected by Craftsmanship.” Martens is a gold miner who lives in a camp roughly 120 kilometers south of Dawson, and he is spending his fifth summer looking for the next strike. Orocal Natural Gold Company specializes in gold found in its genuine form. Since 1965 Orocal has been a leading source of authentic, high-quality gold nugget and gold-bearing quartz jewelry.

When you shop with Tongass Trading Company, you’re truly shopping a piece of Alaska’s history. Life Is A Quilt For Jan Nardone

Jan Nardone has a passion for quilting. But she’s not alone. "Alaska has some of the most beautiful Native designs and carvings you’ll find anywhere,” says Tripp, who has spent his life appreciating the art indigenous groups create using materials from their surroundings. Dennis is one of the few people who can say they have traded an ice box to the Eskimos — in their native language. A Fine Art Gallery In Skagway Discovered In An Old Copper Mine Is A Rare Alaskan Stone

The ghost town of the Kennecott mines sits north of the McCarthy airport, in the Wrangell St. Elias National Park and Preserve 120 miles northeast of Cordova, Alaska. These Kennecott mines were once the largest copper mines in the world. Along the journey to Skagway Shawn Kishnani not only found his calling in the jewelry business, he met his wife, Sonia. Indresh takes pride in catering to every type of customer at Omni Jewelers. He hand-selects every design and brand he sells, from affordable Pandora bracelets to high-end Tissot and Fendi watches. Steve Jaklitsch isn’t even sure if his Back Alley Rock Shop has an address. But it’s definitely worth looking for, especially if you like jade, gold and other gems and minerals. "I don’t think I’ve ever worked a day in my life,” Marvin said. "What I do with my art is my passion. Sharing it is where I get my motivation.” At the heart of the town is Carson’s shop, Ketchikan Souvenir and Candy Company at 300 Front Street. Great Alaskan Souvenir & Gifts is conveniently located near the cruise ship docks. Carson is proud of the quality and authenticity of the merchandise he sells. Murat Ozuzun Of The Local Jeweler For Jack Tripp, an object is more than just an inanimate object. It’s a memory. It’s a sentimental feeling. It’s a reminder of good things gone by. Every shop owner describes their establishment as unique. But few can say they are as homey as Alaska Northern Lights gift shop on Ketchikan’s Creek Street in the former red light district. 3 Generations Of Women Own This Delicious Sandwich Shop

Polar Treats is a three generation female-run year-round deli and café in Ketchikan. At Starboard Frames & Gifts, The Framing Shows Off The Art

Anna Shaffer appreciates the artists in the Ketchikan art scene.