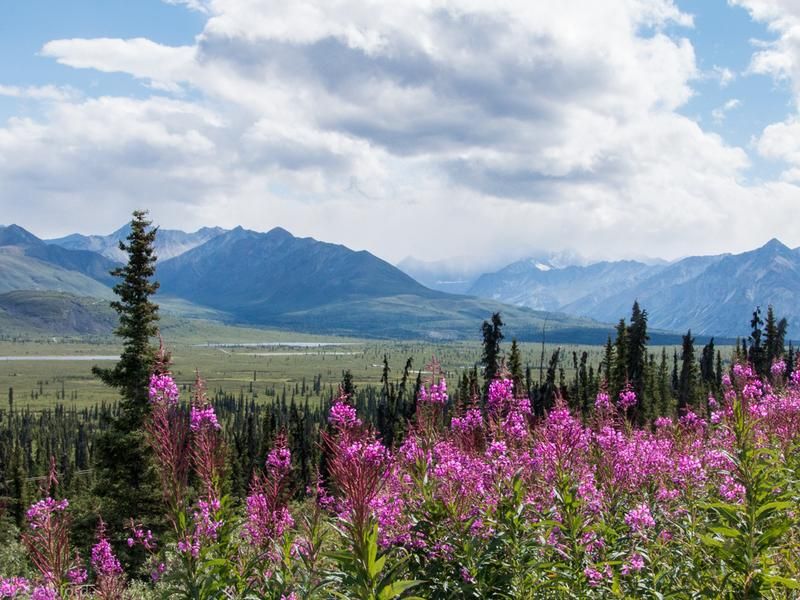 If, in addition to stem height, germination patterns, and seasonality, botanists measured resilience, then the Alaskan fireweed would top the list.

Fireweed is a beautiful, sturdy, and prolific plant very common to Southcentral and Southeast Alaska. Known for its vibrant purple petals that often cover entire mountainsides and roadside meadows, it thrives in Alaska’s extreme environments, most notably in areas recently devastated by fire. 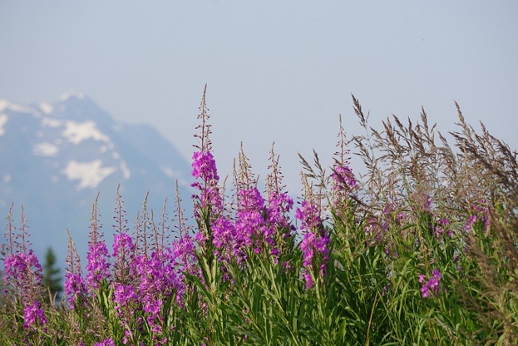 In the same land where pioneering gold prospectors took to Alaska and the Yukon to populate the frigid arctic, fireweed populates vast grasslands and adorns roadsides in purple streaks and splashes. More recently, each year in Alaska and the Yukon, you can tell where there were recent fires from the presence of large swaths of fireweed along the Klondike, Dempster, and Dalton Highways.
It gets its name from its ability to bounce back from the devastation of forest fires. Fireweed can be found in several distinct areas of the world, ranging from Oregon to Ireland to Nepal, especially along river beds and alpine tundra, and in elevation of up to 15,000 feet. When Mount St. Helen, an active volcano in Washington State, erupted in 1980, fireweed was the first fauna to reappear. After London was reduced to gap-toothed ruins from German firebombing in WWII, fireweed provided the first color to reanimate the city.
The stalk height ranges vastly between 1-8 feet and props up striking purple flowers. Seeds of fireweed burrow into the soil and wait patiently for their competition to get struck down by the flames of the next fire, and then immediately spring into action as a re-populator. Perhaps for this reason, fireweed has earned the distinction of being called a "pioneer species”.
Fireweed is a multi-purpose plant. Some use it as a calendar. Flowers bloom in reverse, from the stalk base at the start of summer and move upward vertically like the lights of a mallet-based carnival game as the season progresses.  The blooming of the topmost flower indicates to Alaskans that another summer is coming to an end and that winter is approaching.
Others use fireweed as a great source of vitamin C, and new shoots can be eaten like asparagus and the leaves can be dried for tea. Preparing fireweed is fun and it also tastes great in jams, jellies, and ice cream (or if needed, as a natural alternative to Neosporin.)
Alaska’s official state flower is the forget-me-not, but flower enthusiasts would be remiss to forget the stunning brilliance and I’ll-be-damned tenacity of the Alaskan Fireweed. 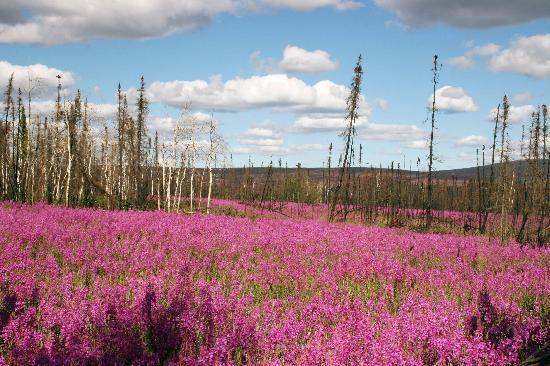