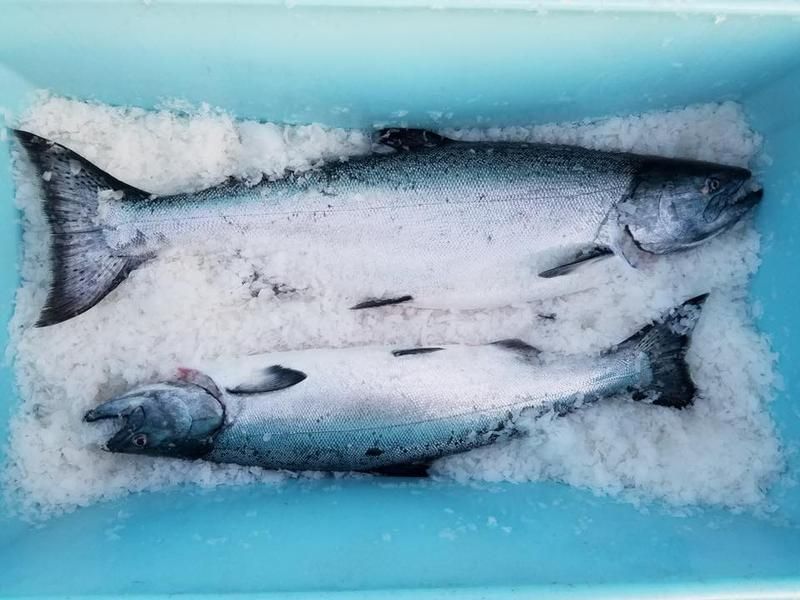 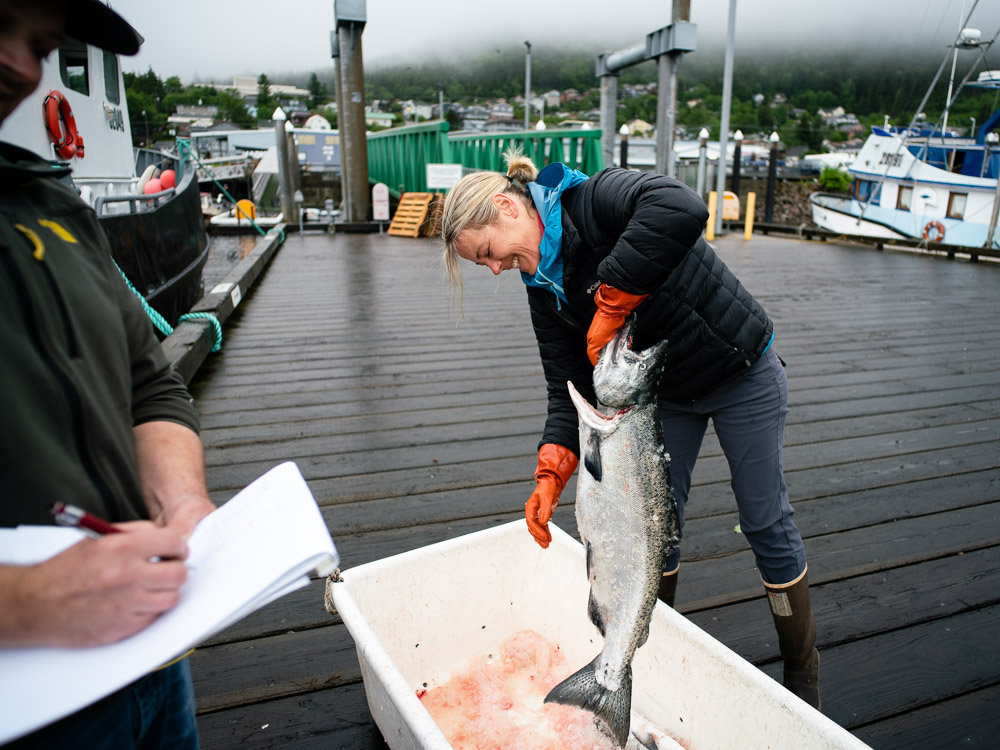 Trish Pearson knows how to pick great fish.
"It’s a personal effect,” said Pearson, of Ketchikan, owner of Fish From Trish. "I hand pick everything so I’m only picking from the boats I want to buy from so I can get the highest-quality fish. Also, the fishermen have to be the kind of people I want to do business with, who are nice. If people are mean I just send them away.”
That personal touch is part of Pearson’s work ethic. The fact is, she loves to talk about fish with anyone. Sometimes chats with her customers become long conversations.
That’s the way she likes it.
"I’d rather speak to one of my customers than have them order online,” she said. "I spent an hour on the phone yesterday and I didn’t even know who they were. But I answered every question. I’m excited to talk about fish and to get everybody get excited about it, too. That’s why I sell retail.”
Pearson has a great eye for good fish, and she is highly selective, indeed "picky,” about the fish she chooses to sell.
"I’m the last person to touch the product before it goes out the door to make sure that’s what my customers want,” she said. "I’m pretty picky and I send a lot of fish away. Picky is good. If I wouldn’t buy it at the grocery store, I wouldn’t expect you to buy it either. I buy depending on how the fish was cut, how they take care of it.”
Pearson is ready for anything when it comes to buying and selling fish. Sometimes things move quickly.
"The other day a guy I knew said he caught 42 coho salmon, so I said, ‘come on in.’ He comes to my dock, we offload it on a crane, weigh it and inspect it and then I start filleting them. One -by-one I boned and filleted them then I pin the bones out of the salmon.” 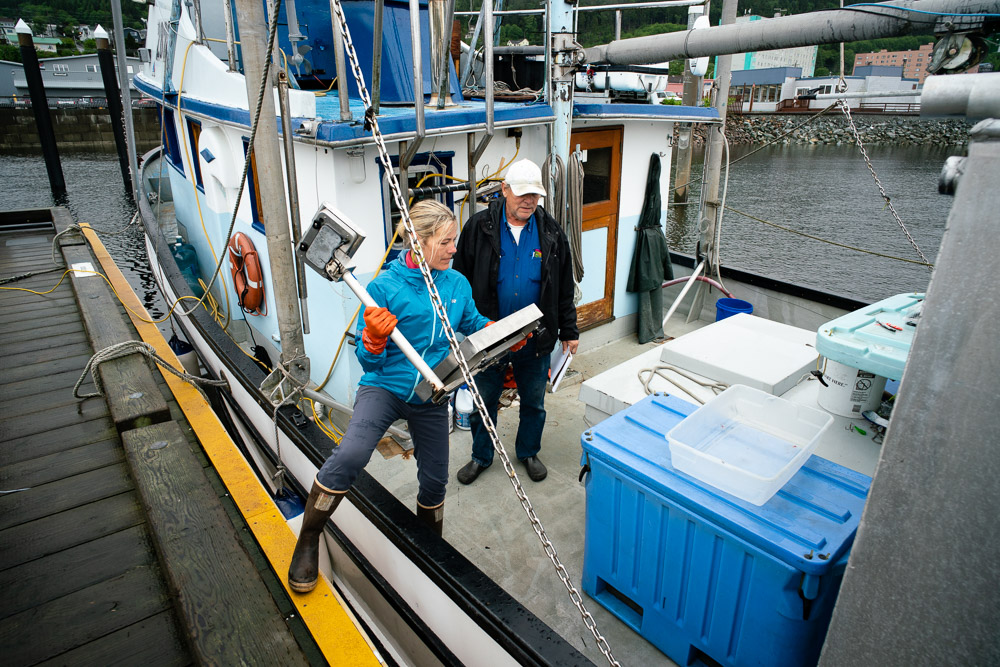 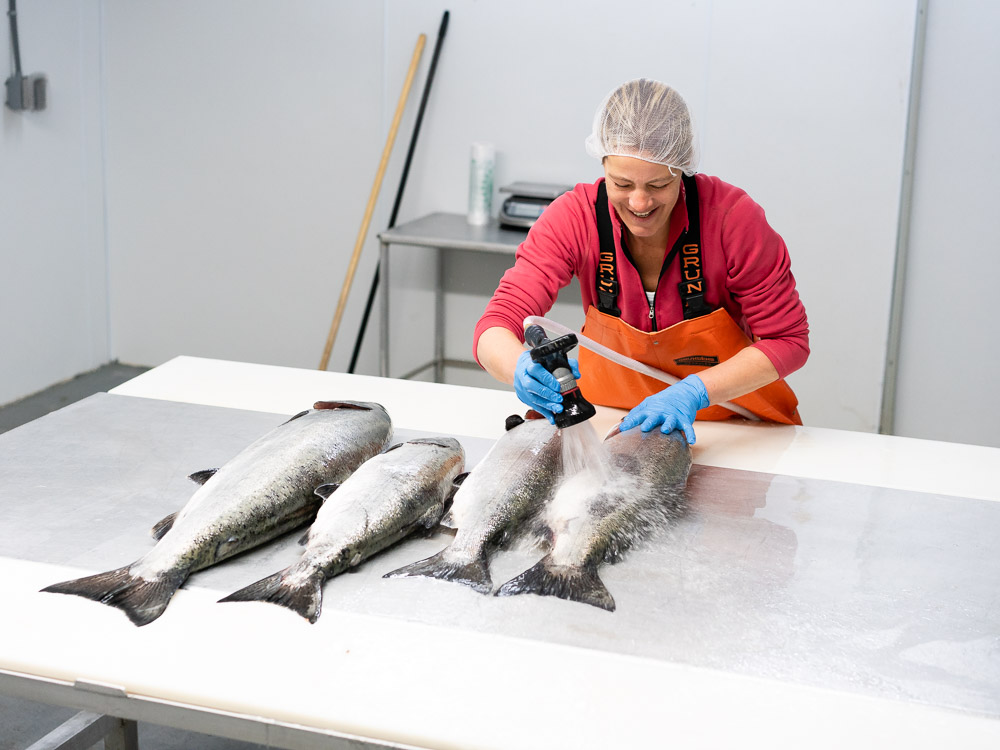 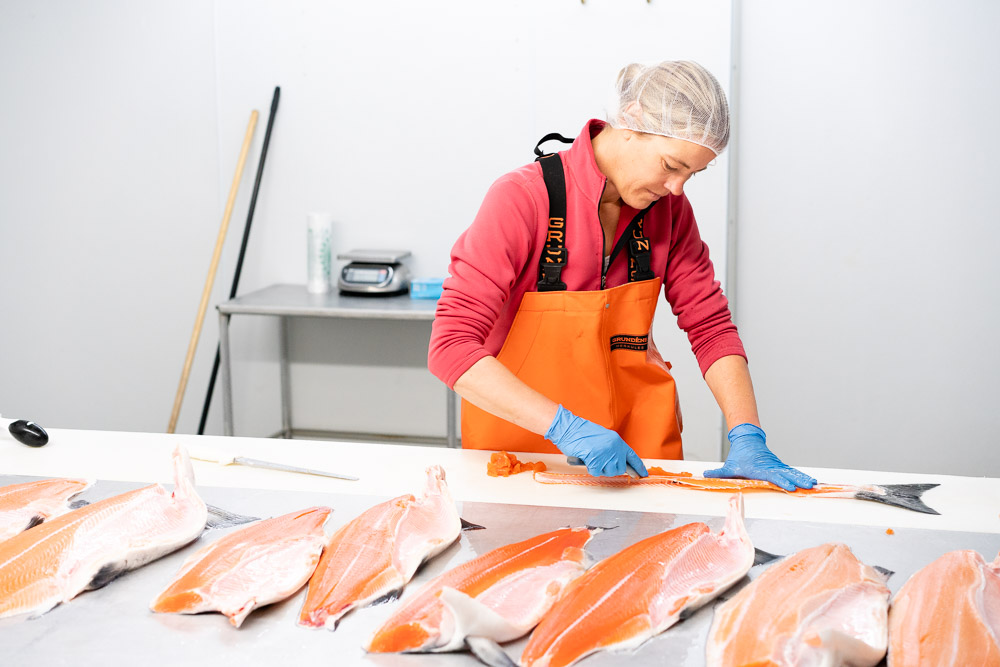 Pearson, a native of Galesburg, Illinois, once was co-owner of a small trucking company in Illinois, and is still an occasional fisher herself. But she sort of backed into what has become a highly successful business.
She started out by fishing on a 53-ft. power troller, "The Velvet.”
"I fished with Guthrie Zastow (of Ketchikan) and it was quite the adventure,” she said. "He took the time to teach me everything about the fishing industry in Alaska. It certainly intrigued me. I fished with him for about a year and we started selling it to processors but then decided we would sell it ourselves.”
Although she always loved being on the water, she "got off the boat and started buying from the guys I used to fish around.”
In 2012 Pearson opened an old cannery, at Ward Cove in Ketchikan, to process fish. The cannery had closed about 18 years ago, and that’s where she started Fish From Trish. At first, she processed fish on a small scale, but then it "jumped to a huge scale,” she said. At one point, Pearson had a staff of 53 and a fleet of 23 boats.
Pearson tired of having such a large operation, however, and has scaled down to three boats. She met Tricia Stutheit and the two operate Fish From Trish. Pearson knew Stutheit from when she was working for a charter company. Pearson also tries to lure people from Illinois to come to Alaska.
They sometimes need help with their workload, so she hires from the area. Some of her best employees have been homeless people, she said.
"They were some of the nicest, most respectful employees I’ve ever had,” she said. "Living where I do, there are always a lot of unknowns. It’s hard to find a responsible person who can be a manager. You mold them and then they disappear. Will the filleter show up today? So, I learned how to filet fish myself about four years ago.”
How did Pearson, from small-town Illinois, wind up on the waters of Alaska?
It started when she visited her daughter, Ashley, who was in the U.S. Coast Guard and stationed in Sitka. Pearson was scheduled to visit for a week. A week became two weeks, and Pearson decided she never wanted to leave Alaska. So, she packed up and moved to Ketchikan in 2010.
"I didn’t know much about fish when I moved to Alaska,” she said. "The first time I saw a halibut on the boat it scared me. I just didn’t know much about the fishing industry when I moved here. I never dreamed this would become my dream job. I love being on the water, and I fell in love with the Alaska lifestyle. It was a bonus to be part of the fishing industry.”
The fishing industry has been good to Pearson, and Fish From Trish is a labor of love.
"I sell fresh every day, then I vacuum-pack the fish and blast-freeze it and wait for fish lovers to call,” she said.
And they always call. 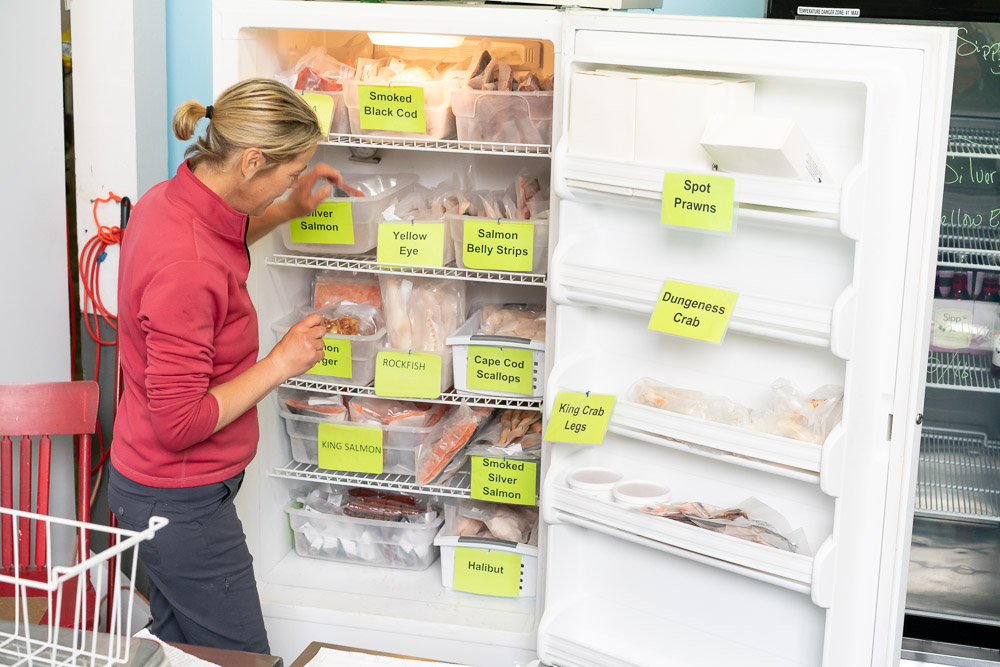 Although Pearson works with chefs from around the country – and even the world – she takes orders from anyone and sends them overnight via Fedex.
One call came a few years ago from a fish loving friend who called her with an order that was to be sent to a mysterious destination in Paris. The friend and mentor, Ramona, who lives in Canada, said Pearson had to make a delivery of one red and one white salmon to Paris. Ramona knew a chef in Paris and he wanted Alaskan fish for his menu.
"It turned out he was the chef for the restaurant on top of the Eiffel Tower,” she said. "He called me and asked 10,000 questions. And they eat every part of the fish there, even the eyes. He opened up for elite chefs from around Paris and they ate it every different way they could eat it. They just went nuts.” 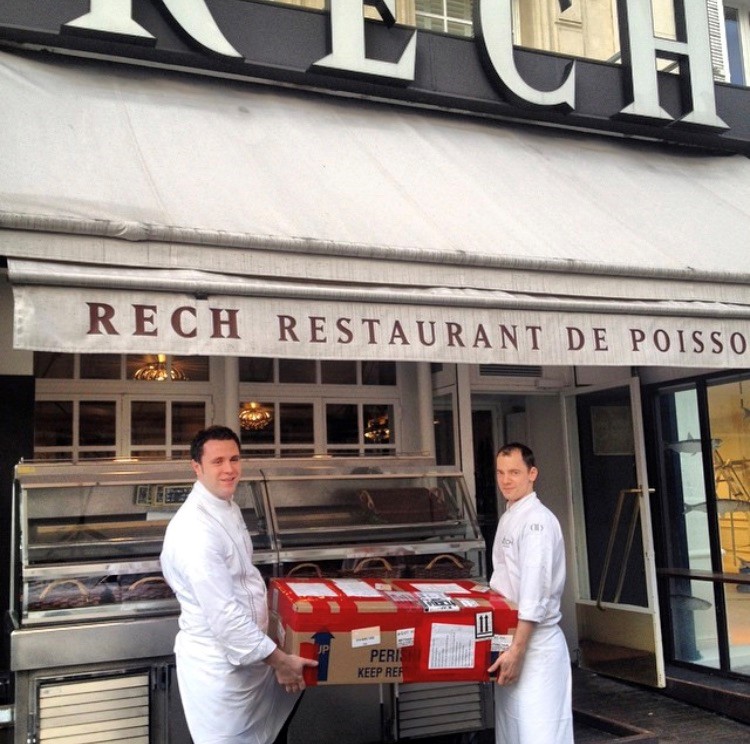 Pearson, who said she never gets sick of eating fish and neither does her dog, Meaty, has a taste for winter king salmon.
"The fat content of winter king is amazing,” she said, adding that fat content burns away and creates a sweet taste like no other fish. "I never had fish before I came to Alaska. But when I tasted Alaskan fish, I said to myself, ‘Oh my gosh, people need to get this and afford it and know where it comes from.’”
Pearson makes recommendations to her fellow Midwesterners who have never tasted Alaskan fish, and she usually guides them to yellow eye, salmon, or red snapper. "I also steer them to halibut or cod,” she added.
Because Pearson enjoys her work life, her leisure time is limited, Pearson said, "because I feel like I’m always working.” But when she does have time off, she likes to spend time with her youngest daughter, Sadie, and she also loves hiking.
But most of all, she simply loves being in Alaska.
"Being from a small farm town in the Midwest I would rather wake up and see the Alaskan scenery every day,” she said. "The view I get, the mountains, the ocean. I live right on the water at the fish plant so I have a great view. This is where I want to be.”
To order from Fish From Trish, visit our online store 24/7 or call us at 513-512-5946 and place your order over the phone. 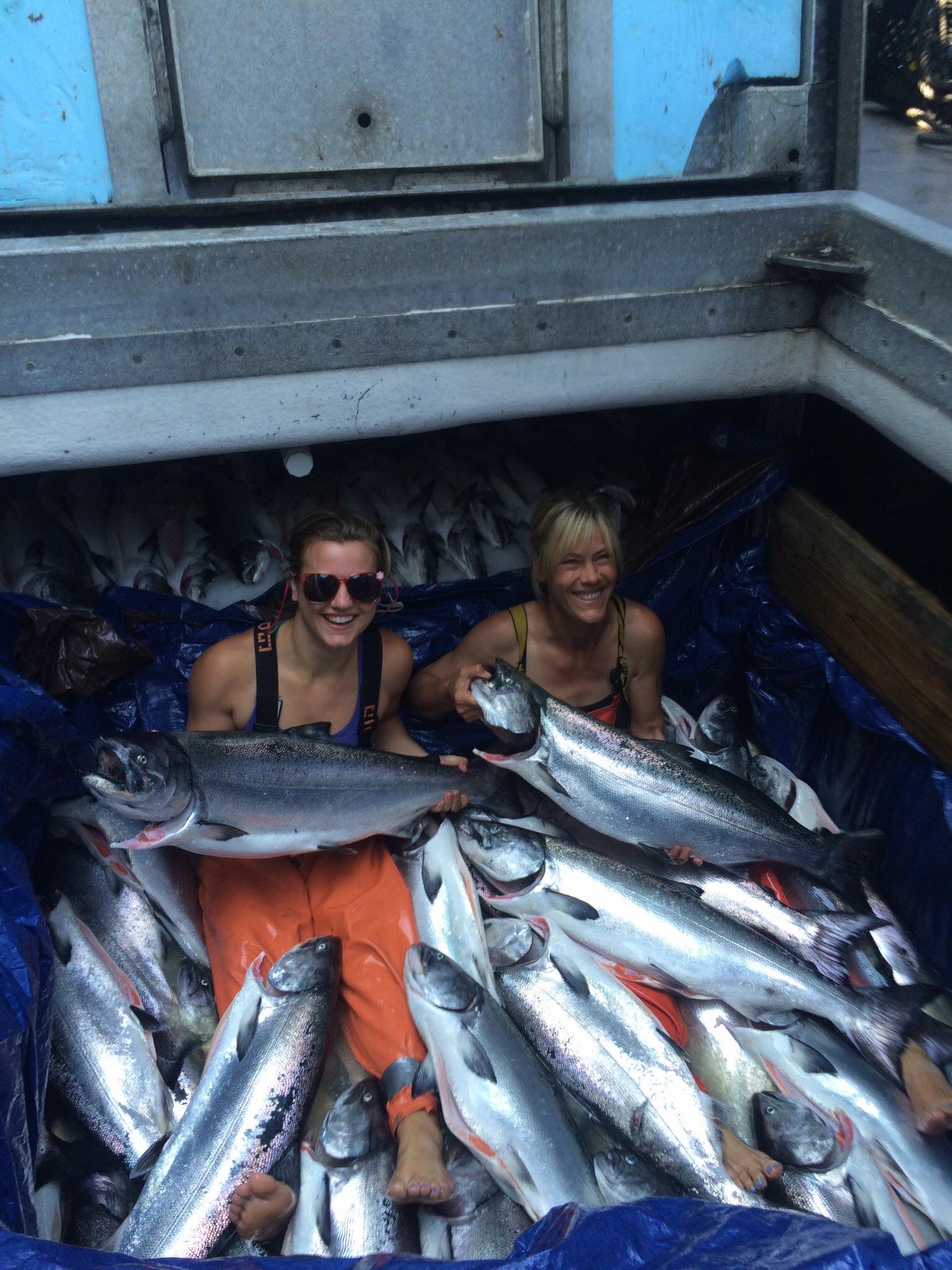 Price $38.00 per pound    No other shellfish in the world makes quite the impression of Alaskan King Crab. Unmatched for its sweet fl... 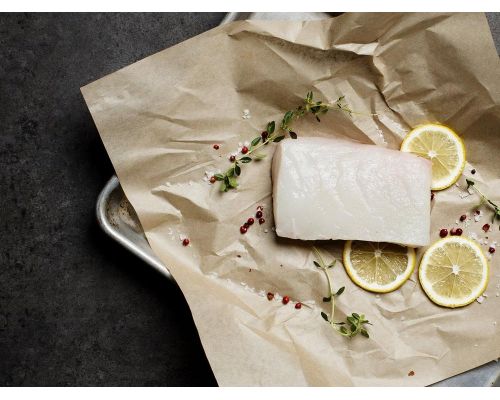 Price $30.00 per pound      With its firm, flaky texture and delicate flavor, Alaska halibut has earned its repu... Price $32.00 per pound      The king of the salmons, king salmon is prized for being the largest of the Pacific salmon spec... Have you ever wanted to taste octopus? Now you can! Enjoy this actually delicious Alaskan octopus straight from the Bering Sea.  &nb... 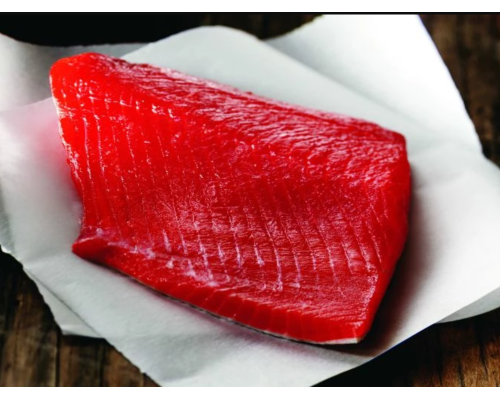