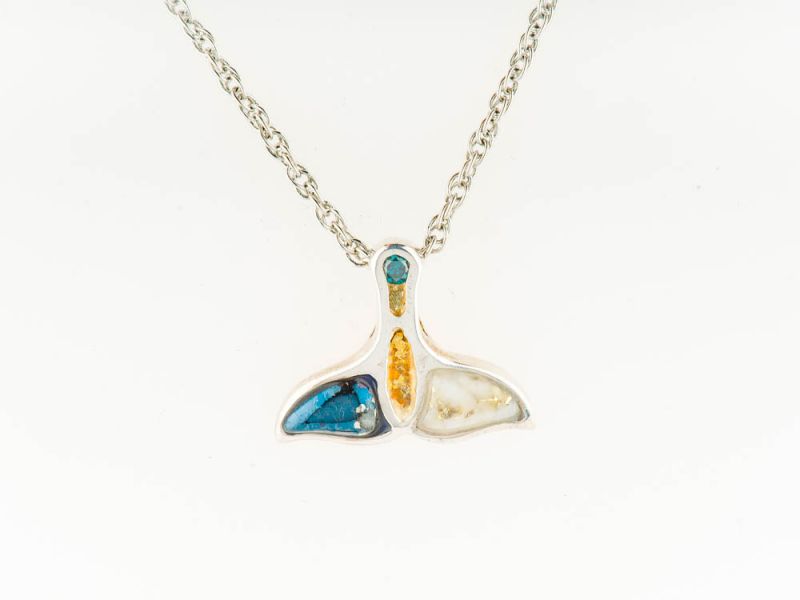 By Star of Alaska

Enjoy these authentic handcrafted gold quartz, gold nugget, and covellite whale tail pendant.  Handcrafted in 14 karat gold setting. Our exclusive covellite with veins of gold pyrite is mined in the Kennicott Mines in the Wrangell-St. Elias Mountain Range, now a National Park & Preserve. It is some of the highest grade covellite found in the world. One-of-a-kind. Includes a certificate of authenticity.

All pieces of gold quartz and covellite are hand cut to fit the jewelry design then properly shined using 6 different jewelry polishing wheels. Each nugget is hand inlaid like a puzzle and soldered in by our master jewelers, which is very labor intensive. Because gold quartz, gold nuggets, and covellite found in nature are rare and one-of-a-kind you will receive the product pictured with very slight variations in veining. All jewelry is backed by the manufacturer.

If this item is not in stock our jeweler will make it in 4-6 weeks and ship it straight to your door.

The Star of Alaska’s beauty reflects its local lineage and is fully indigenous from "the last frontier." It is a gem-quality stone, originally mined at the historic Kennecott Mine, once owned by J.P. Morgan and the Guggenheim family and located in the remote wilderness of the Wrangell-St. Elias mountain range. Rosemary Libert through her Star of Alaska line has taken these gems and transformed them into exquisite pieces with rich Alaskan ancestry.

This gem quality material is not commercially mined in Alaska and is increasingly rare, difficult to find, and highly sought after by gem collectors. The production from the Kennecott Mine is considered the finest quality Star of Alaska in the world because it was found in large, pure, massive pieces. The mine, which opened in 1906, closed permanently in 1938, making the gems scarce. For years, the stones for the original pieces were in a private estate. Rosemary continues to work with Alaskan rock and mineral collectors to source this amazing mineral.

For those looking for a piece of jewelry that beautifully captures the wonders of the wide-open Alaskan skies and expansive wilderness, the Star of Alaska is perfect: intense beauty, rare quality, and locally sourced.

Look for the registered *A* stamp on the back of each fine piece, your assurance of authentic Star of Alaska fine jewelry.

What is gold quartz?

Millions of years ago, gold was formed in quartz deposits by hydro-thermal pressure, deep within the earth. Gold remaining in these deposits is called gold-bearing quartz or gold quartz for short. It is extremely rare, accounting for less than 1/20th of 1% of all gold found annually.

Where is it found?

Gold quartz is found in underground hard rock mines in the same areas where gold nuggets are found. In Alaska, it was first discovered in 1880 in the town Juneau. Regions of Canada, California, and Australia are also well known for gold quartz.

Like other precious gemstones, Gold quartz comes in different grades. Orocal is well known for having the highest quality authentic gold quartz with spectacular patterns of gold. We grade the quartz on a few different factors being how white the stone is. The brightness of the white increases the value along with the vein of gold. The actual pattern and placement of the exquisite gold vein. In fact, that vein is very pure around 23% purity.

Some stores sell man-made imitation gold quartz which is fragile and frail. This leads consumers to believe its natural when it clearly is not. When buying from us you know it is authentic coming directly from Orocal the source. We offer a 110% money back guarantee card which is called are Certificate of Authenticity.

Gold Nugget Guide
What is a natural gold nugget? It is a piece of gold that broke out of quartz deposits within the earth when erosion took place. It also goes by the name placer gold and each piece is a one of a kind with no two being exactly alike.
Where can gold nuggets be found? Wherever the effects of erosion took place. That would include rivers, streams, ancient dried up river channels and underground riverbeds.
How pure are they? Gold nuggets range from 65 to 95 fine 16-23KT gold and can have other mineral content such as silver and copper mixed in with it.
What sizes do they come in? Gold nuggets come in all sizes, the smaller one range in sizes from 1 millimeter up to 6 and is often referred to as flakes. Bigger flakes are called nuggets and have been found as large as 2500 ounces although almost all nuggets bigger than 300 ounces were melted.
How are gold nuggets found? They can be found in rivers and streams using a gold pan or suction dredges that act like an underground vacuum cleaner. Larger operations use large machinery that dig up huge sections of dirt weighing several tons and run it through machines that separate the gold from the dirt. Nuggets are also found using a metal detector.
How are they weighed? They are weighed by the troy ounces. 12 ounces = one pound which differs from weight which is 16 ounces to the pound. The troy ounces are broke up into 20-penny weight to the ounces and use the symbol DWT or by the grams which has 31.1 to the ounces. The larger the nugget the more rare and valuable they are. A one-ounce nugget is now considered as rare as a five-carat diamond. (How many of those do you own?)
Why are some real bright and others dull? Because it was formed underground in quartz deposit you often find quartz mixed in with it. When they broke off into the rivers and streams they tumbled against the sand and gravel, which gave the nuggets, it’s texture but dulled it. They can be cleaned in different solutions, and then tumbled in different media to give it the shine.
Where are your gold nuggets found? All of our gold nuggets under 4 grams come from two main sources. One is located near Dawson in the Yukon Territory. The second is Atlin, BC Canada about 50 miles as the crow flies from Skagway, Alaska. Skagway was where the miners of the 1898 Klondike gold rush traveled through to reach the gold fields. This is the reason we describe them as Alaskan Yukon BC nuggets, genuine, natural gold nuggets.
All of our gold nuggets are natural, genuine, and authentic as found in nature. Not all gold nuggets are natural, some people man-make them by taking smaller gold flakes melting them and casting them into the shape of a nugget. Make sure to ask if they are genuine natural gold nuggets as found by the miners and come with a certificate of authenticity.