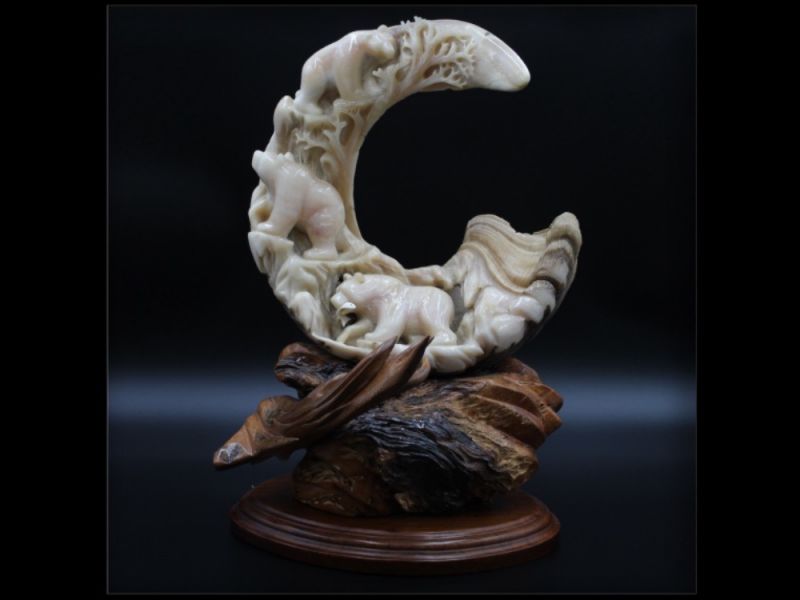 This stunning bear scene was carved out of a Dall Sheep Horn. On the back of the horn, there is also a carving of Dall Sheep. This carving sits on a base of Rosewood.

Sculptures are hand-carved by Eddie Lee in his Pacific Northwest studio. Every carving is one of a kind, individually carved. The sculpture you see pictured is the exact one you will receive. Every fine art piece is hand-signed by the artist and includes a certificate of authenticity, which describes the art piece and has a short biography of a master sculptor, Eddie Lee.

Eddie Lee's Biography:
"Born in 1960 in the emerald city of Nha Trang, Vietnam, Eddie Lee expressed his curiosity for art as a young boy by sketching the surrounding nature. At age 18, Eddie escaped Vietnam as one of the hundreds of thousands of “Boat People” seeking refuge and a new start. After surviving a week in open seas and six months in a Malaysian refugee camp, he arrived in the United States - young and determined to find a purpose and passion in his new life.  Eddie made Seattle, Washington his home. It’s there that, without the help of formal training, he discovered his sculpting ability. He explored the Northwest Coast and Alaska extensively, where he observed the native peoples’ traditions, art forms, and spiritual relationships with the natural world. Moved by Alaska’s wilderness, he was inspired to convey its beauty through his art.

Since establishing his studio in 1980, Eddie has garnered respect from art lovers and collectors worldwide. His place as one of the country’s most inspired and gifted artists is reflected in print media and TV coverage on networks such as CBS and PBS. You can also find his work displayed in a few west coast museums.

Each piece from Eddie’s studio is a one-of-a-kind, handcrafted piece by him and his original team of artisans. These pieces reflect the strength and the spirit of the subject and draw from the symbolism and spiritual connection of generations of indigenous people who have come before us. The subject, shape, and material are an expression of Eddie’s feelings and give new life to old forms. Eddie keeps pushing the limits of his art and achievements. Ultimately, he hopes to continue to share his art for all to enjoy across the globe."

About the Materials:
Hand-picking all of his raw materials is how Eddie Lee’s creative journey begins. The natural color and shape of stones, fossils, and woods are the basis on which he builds his vision. Working in over 30 different unique mediums, Eddie has honed his skills to unveil each material’s natural beauty knowing how to work with its unique traits and hardness.

Antlers and Horn are made of bone and keratin, antlers are pure bone and grown directly out of the skull. Males in the deer family, such as caribou, including its biggest member, the moose annually shed their antlers in early December. Male Dall sheep have thick, curling horns, while the females have shorter, more slender, slightly curved horns. Hardness: 2

Cave Bear Fossils are mostly found in Europe. Cave bears lived during the Pleistocene epoch and became extinct ~24,000 years ago during the Last Glacial Maxima. They were comparable in size to today’s brown bear weighing 700 - 1300 lbs. Hardness: 2

Marble is a metamorphic rock composed of recrystallized carbonate minerals, most commonly calcite or dolomite. Marble has been prized for its use in sculptures from classical times till today’s modern art. Marble has a vast variety of colors ranging from brown, white, pink, green, and many more. Hardness: 3- 5

Selenite is composed of oxygen, sulfur, hydrogen, calcium, and water. It is a glassy, well-crystallized form of gypsum and is often referred to as satin spar. Selenite can be found in various places across North America, England, and the Sahara Desert. This magnificent stone is also known to have healing powers. Hardness: 2

Soapstone is a “steatite,” a precious form of soft stone that is highly valued as a carving medium, but is also used in baby powder, paints, and rubber. Deposits can be found from around the world, in colors ranging from brown, blue, green, and red depending on the mineral content. Eddie collects most of his soapstone from the Pacific Northwest. Gently rubbing with linseed oil can liven the color if they are getting lots of love pets. Hardness: 1

Walrus Fossils are prized for their density and rich coloration from thousands of years of mineralization turning them into fossils. Fossilized Walrus Ivory can range in color from a pale ochre to browns, and blues. Along the Bering Sea today, fossil walrus bones and ivory are unearthed by the Inuit people, who have hunted walrus for thousands of years to aid in survival. Bone Hardness: 3, Ivory Hardness: 2.5

Woolly Mammoth Fossils have been buried for a minimum of ~10,000 years since their extinction in the early Holocene epoch. These 4-6 ton creatures mostly roamed the lands of Alaska and Siberia, where fossils are still unearthed today. Mammoth ivory’s distinction can be found in its Schreger lines and incredible deep coloration absorbed from mother earth. Mammoths only had 4 molars but would have 6 sets during their ~50-60 year lifespan. Molar Hardness: 3-6, Ivory Hardness: 2.5, Bone Hardness: 3