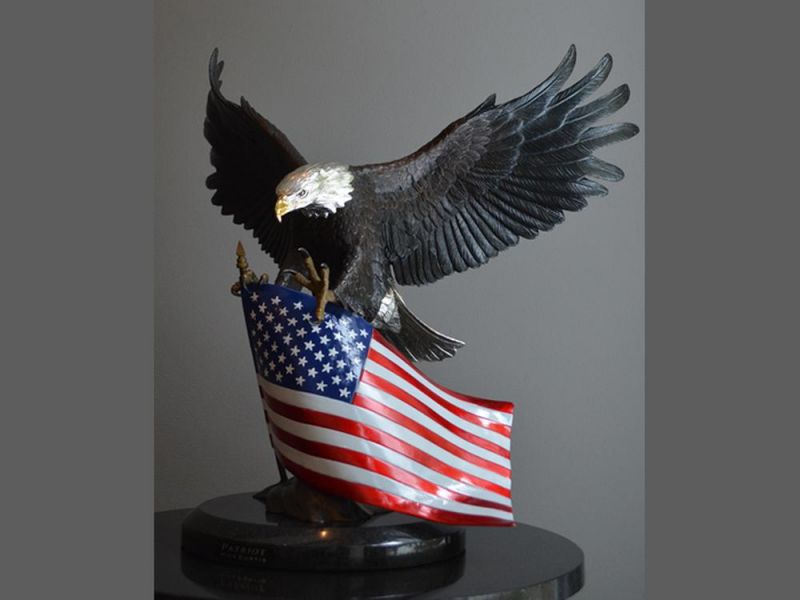 Enjoy eagle in his most patriotic form, carrying the United States flag.

Featuring a beautiful rendition of the great American Bald Eagle, the national bird, with silver patina for the head and neck and pure 24K gold patina for the beak. Comes with a black granite base.

Mike Curtis is well known for creating beautiful and inspiring wildlife sculptures in bronze. He has been sculpting the bald eagle since 1971 and is considered the foremost sculptor of this magnificent creature. His artistic and accurate renditions of the bald eagle are widely recognized as those best capturing the beauty and freedom of our nation's proud symbol. Throughout the year, Bald Eagles dive in the lake after fish and perch in the trees near his studio. Studying eagles in the wild, Curtis observes their courtship rituals, nesting habits, and drawing their catches from the waters of the lakes and rivers. His commanding portrayals of the powerful and symbolic eagle remain unequaled.

Mike Curtis sculptures have been presented both to and by United States Presidents. In 1989 he was the artist chosen by the White House to prepare a work of art, presented by President George H.W. Bush to the Chinese, which would symbolize the proud heritage of the United States. A Mike Curtis sculpture was also selected for presentation to President Gerald R. Ford upon his retirement. In 2009 "Eagle Rock” was purchased for the permanent collection of the Presidential Conference Center hotel. The life-size bald eagle sculpture is prominently displayed in the lobby of the anchor hotel for the William Jefferson Clinton Presidential Library in Little Rock, Arkansas.

The United States Department of Defense Advanced Research Project Agency has commissioned Mike Curtis bronze sculptures for presentation to the winning competitors of one of the world’s most prestigious events. The highly competitive event draws engineers and talented designers from around the world engaged in scientific research and the design of future technologies.

Dedicated to law enforcement officers worldwide who have given the ultimate sacrifice, a Mike Curtis Bronze Sculpture was commissioned and installed at the FBI National Academy Hall of Honor, Quantico, Virginia.

Mike Curtis has been commissioned to create sculptures for the NASCAR races, which were presented in Atlanta, Daytona, and Bristol Tennessee.

Listed among the many well-recognized collectors of his work is Astronaut Eugene Cernan, the last man to step foot on the moon's surface and the commander of the Apollo 17 mission and the Lunar Landing Module Challenger.

Mike Curtis has fond memories of his childhood, growing up on the California coast and in the rugged mountains of Colorado. Born in Los Angeles, his family later moved to a small rustic log cabin on eighty acres in the Colorado wilderness. His days were spent exploring, fascinated by the variety of wildlife that inhabited the remote area. It was here that his love of nature and connection to his subjects began. Returning to California as a young boy, he discovered an appreciation for the beautiful California coastline and the sea life that inhabited the ocean waters. Shortly after serving his country in the United States Army, Mike and his wife Marlene moved to the Pacific Northwest where they raised their son Jason and daughter Elaine. A tree-covered mountainside in Northern Idaho, overlooking Lake Pend Oreille, is now the location for the home and studio of this renowned sculptor. The scenic area is a gathering spot for bald eagles and abundant with wildlife, a perfect environment for an artist who is a master sculptor of wildlife subjects.

His selection of impressive Limited Edition Bronze Wildlife Sculptures are collected worldwide and are ideal for personal collections, individual gifts, and corporate presentations.