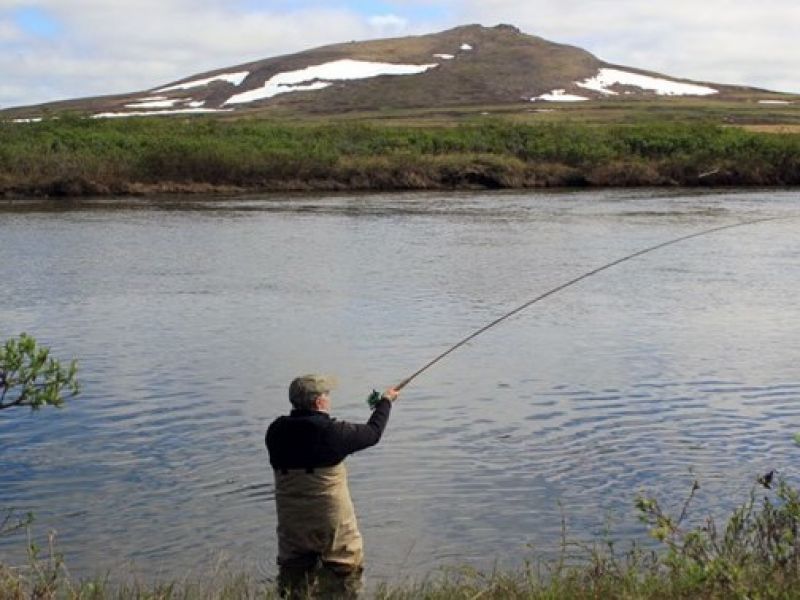 Top Activities & Things To Do
Fishing In Alaska: An Introduction To Alaskan Halibut & Salmon
Alaska contains over three million lakes, 12,000 rivers and thousands of fish-filled streams. Alaska’s "big two,” as they are known by angler-philes, refers to the halibut and salmon species— two of Alaska’s most well-known species. Learn a little bit about the fish that are essential to Alaska’s favorite pastime. Scroll down to learn more about their morphology and fishing seasons.
Pacific Halibut 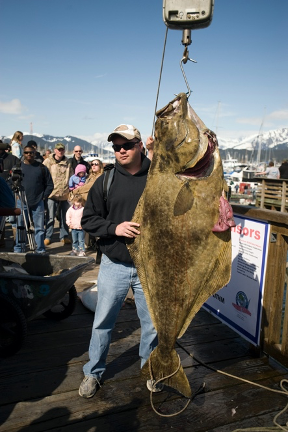 Pacific halibut can weigh up to 500 lbs, can live up to 55 years, and can grow to be taller than the tallest NBA player of all time. Halibut is classified as a bottom feeder or flatfish because it lives and feeds on the ocean floor.
Because halibut are flat, they actually swim sideways and have 2 eyes on the same side of the head.  Did you know that most halibut are right-eyed, meaning both eyes are found on the upper, dark side of the body? However, left-eyed halibut do exist but they are extremely rare, possibly 1 in 20,000. In these fish, the eyes and dark pigment are on the left side of the body, and the fish swims with the right (white) side facing down.
Due to their grand proportions, anglers have given halibut the moniker "barn doors.” Look to fish for these big guys between the months of May and August.
Red Salmon (Sockeye Salmon) 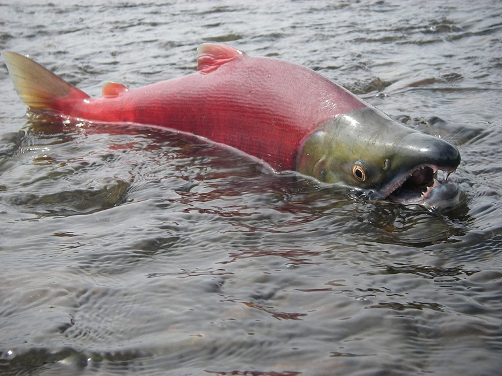 Sockeye salmon are characterized by their fang-like teeth and the striking contrast of their red and green molt which they gain after returning to freshwater rivers and streams after spending time in the open ocean. The resulting color is where the sockeye’s alternate name "red” comes from. Adults weigh a medium weight of around 10 pounds. Sockeye salmon are best fished in Alaska in June and July.
Pink Salmon (Humpies) 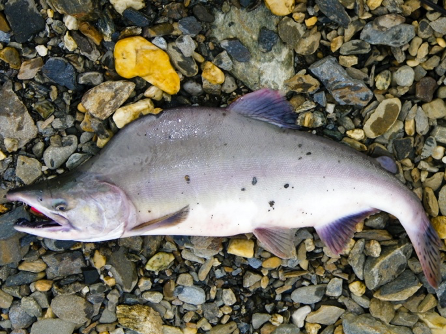 Pink salmon are the smallest and most abundant of Alaska’s 5 salmon, averaging around 6 pounds. Males develop humps on their backs after they enter fresh water to spawn, giving them the name "humpies.” This type of salmon is fun to catch and primarily used for canning and smoking. The spawning runs of pink salmon are large because they only spawn every two years. As a result, the population spreads out across most of Alaska's coastal regions. You can fish for pink salmon every other August (during even years).
Silver Salmon (Coho Salmon) 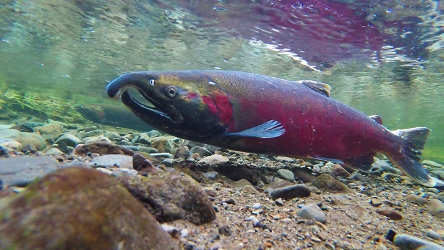 Besides looking like Gonzo from The Muppets, silver salmon are known for being exceptionally adaptable to different bodies of water. In fact, its hooked nose comes from changes in the coho’s morphology when it is ready to spawn. Anglers like to fish for silver salmon in Alaska because of the great fight these fish give. They are best fished in Alaska in late summer, August and September.
King Salmon (Chinook Salmon) 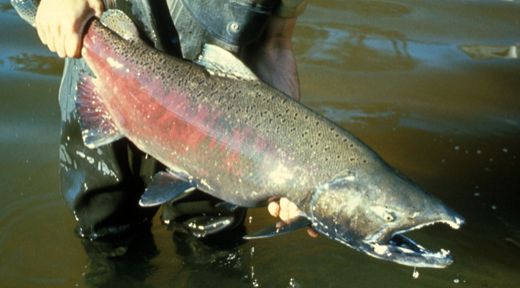 Chinook are the endurance athletes and GPS’s of the 5 salmon species; certain king salmon swim upstream as far as 2,000 miles (on rivers like the Yukon and the Tanana) to lay their eggs in the exact same gravel pits that they were born in, using their sense of smell to guide them home. Averaging 10 to 50 pounds, they are the largest of the Pacific salmon species. King salmon are a prize catch and are best fished in Alaska in May, June, and July.
Chum Salmon (Keta/Dog Salmon) 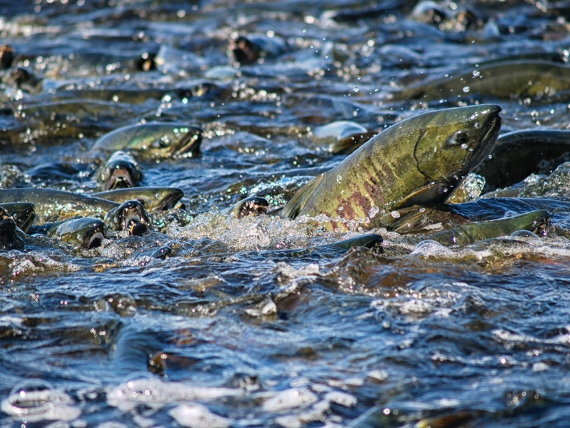 Chum salmon can be distinguished by several purple bands slathered across their torso, which they develop after entering freshwater. Medium-sized, about 12 to 15 pounds, they are the second largest of the species after chinooks. They have a lower fat and oil content than the others, offering a relatively mild flavor with a meaty, firm texture. While chum often get a bad rap, they can be quite tasty when prepared right. Best chum fishing in Alaska is between July to August. 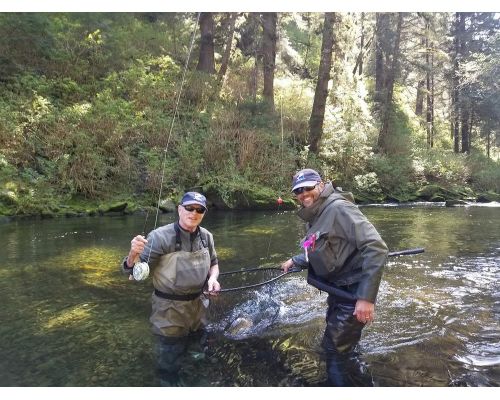 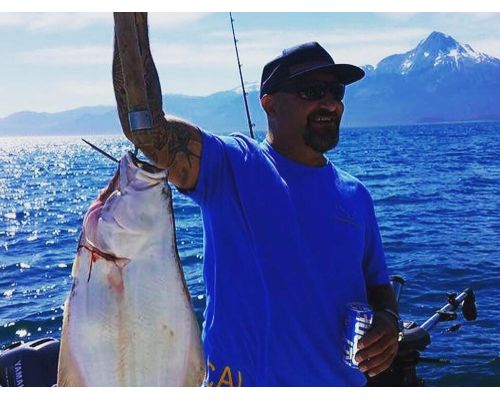 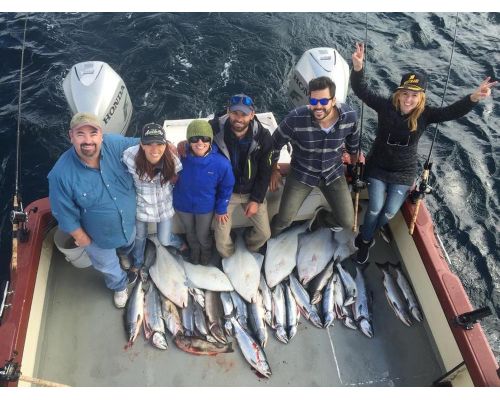 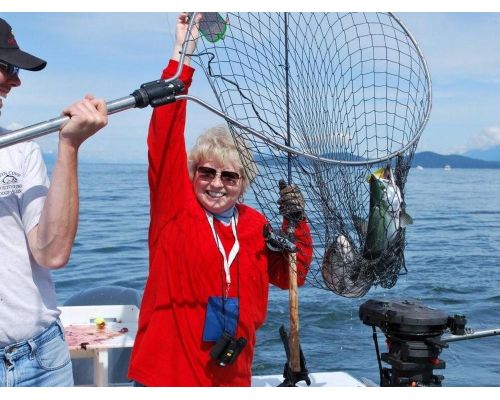