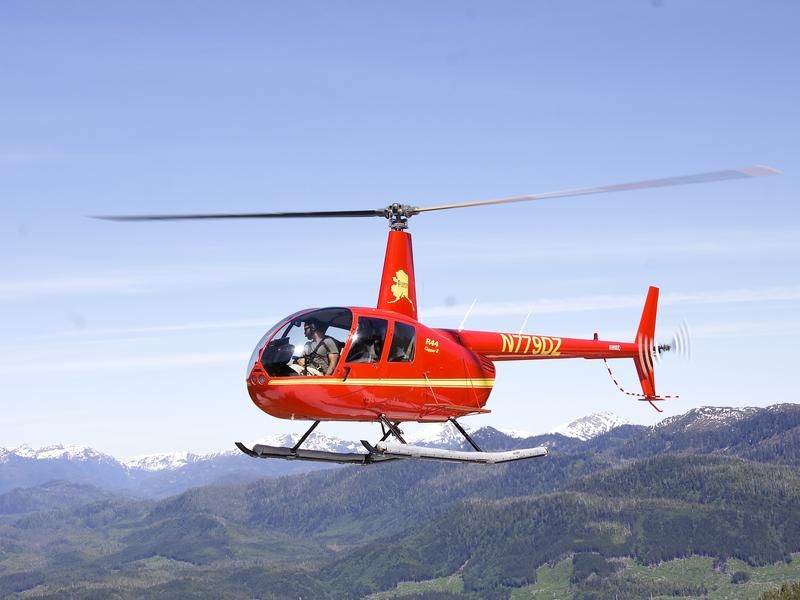 Into The Wild
Carrie Schwausch Can't Get Enough Of Piloting A Helicopter In Ketchikan, Alaska

It was a flight that might have terrified other people. Not Schwausch.

"One day I took an amazing helicopter ride,” she said. "The pilot was doing a crop duster run. We were flying straight out over the field, and then suddenly the pilot did a 180 (degree turn), came up vertical and descended back horizontal. I said to myself, ‘I can’t get enough of this!’”

It was the beginning of a new career.

"I went from being educated as an engineer, but I got tired of being in front of a computer all day, to being a firefighter in Northern California for 11 years,” she said. "But now I love being in a helicopter.”

Schwausch, a San Francisco native who got her degree at California Polytechnic State University in San Luis Obispo, California, is a pilot who was trained by Pollux Aviation, a Wasilla, Alaska-based air service that owns and operates Helicopter Air Alaska in Ketchikan. Schwausch sometimes flies for Helicopter Air Alaska during the summer, and she can’t think of anything she’d rather do.

"The great thing about these tours is 99 percent of the time I love it,” she said. "It’s so beautiful, I’m shocked at how fast I can get to a 1,500-ft. waterfall from our dock.”

She said she gets real kicks out of flying happy passengers to remote destinations like the 1,500-ft. Mahoney Falls near Ketchikan, Alaska. 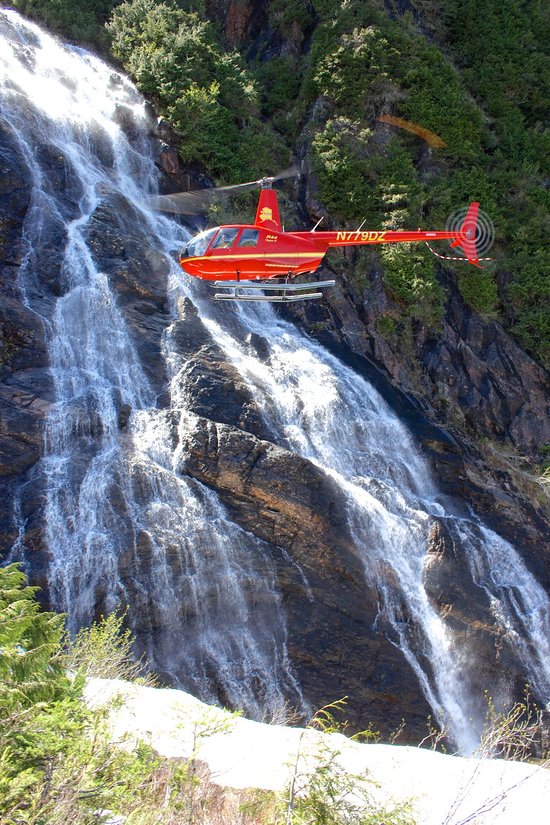 "We have what we call the Ketchikan Fjord Tour,” she said. "It’s very steep and dramatic. That’s what I love. The passengers have headsets and I’m narrating but also enjoying the scenery. Some folks want to enjoy the scenery and be quiet. When I get a sense of that then I’m quieter. But generally, I narrate the tours.”

"The beauty amazes me and it’s also challenging. I love going up and knowing I have happy passengers aboard. I think to myself, ‘yeah, I’m doing this.’ The beauty is amazing and I’m lucky enough to share this great state with visitors.”

She said all of her passengers are memorable in some way, but some she remembers more than others.

"I don’t remember names, but most people are a joy to fly, and some you just connect with better,” she said. "I had a couple from upstate New York who flew with me and they thoroughly enjoyed it. They were a pleasure to have on board.”

Schwausch got her pilot training in Texas and got the experience she needed and then interviewed with Pollux for the job.

"I found Pollux because I was looking to do tours in the Anchorage area,” she said. "I went up and met with them a couple of times. Pollux mainly does utility work, a lot of sling-loading (in which a cargo hook is attached to the helicopter to deliver utility equipment) and I thought it was something I would really like to do.”

But instead of utility work, Schwausch wound up as a passenger pilot with all the experience of a veteran after taking extensive training classes.

"The training Pollux does is first class,” she said. "If you have engine failure, for example, you often don’t have a lot of options for landing. Pollux is a first-class operation that prioritizes safety and I was amazed at the emergency training they did. I got off the helicopter and knew I was in good hands.”

Schwausch is an Alaskan veteran. Her husband has owned a fishing camp in the Aleutians of Southwest Alaska since 2004, but she has not been to Ketchikan in Southeast, and the idea of flying tours through the Ketchikan area had great appeal due to the spectacular scenery, including the magical Misty Fjords National Monument and the Tongass National Forest.

Helicopter Air Alaska offers several breath-taking tours. The Mountain Lake Tour is a 30-minute excursion that gives passengers a view of the pristine Tongass National Forest, the Top Of The World Tour is a 40-minute tour with an exclusive mountain landing, and the Mahoney Falls Tour is a 20-minute tour that flies out to the 1,500-ft. Mahoney Falls waterfall.

"It’s just spectacular up there,” she said. "We have snow caps and more often than not we see mountain goats. We can get anywhere in about 20 minutes.” The helicopter can accommodate three passengers.

"I love ‘em, all” she said of the various tours, although she said flying over Mahoney Falls is one of her favorite flights.

When she is off-duty, Schwausch said her life is much calmer. She calls herself a homebody who loves to read but also likes hiking in the off-season. She also enjoys taking people sport-fishing.

But most of all, she loves being in flight. "I just love the beauty of Ketchikan,” she said. 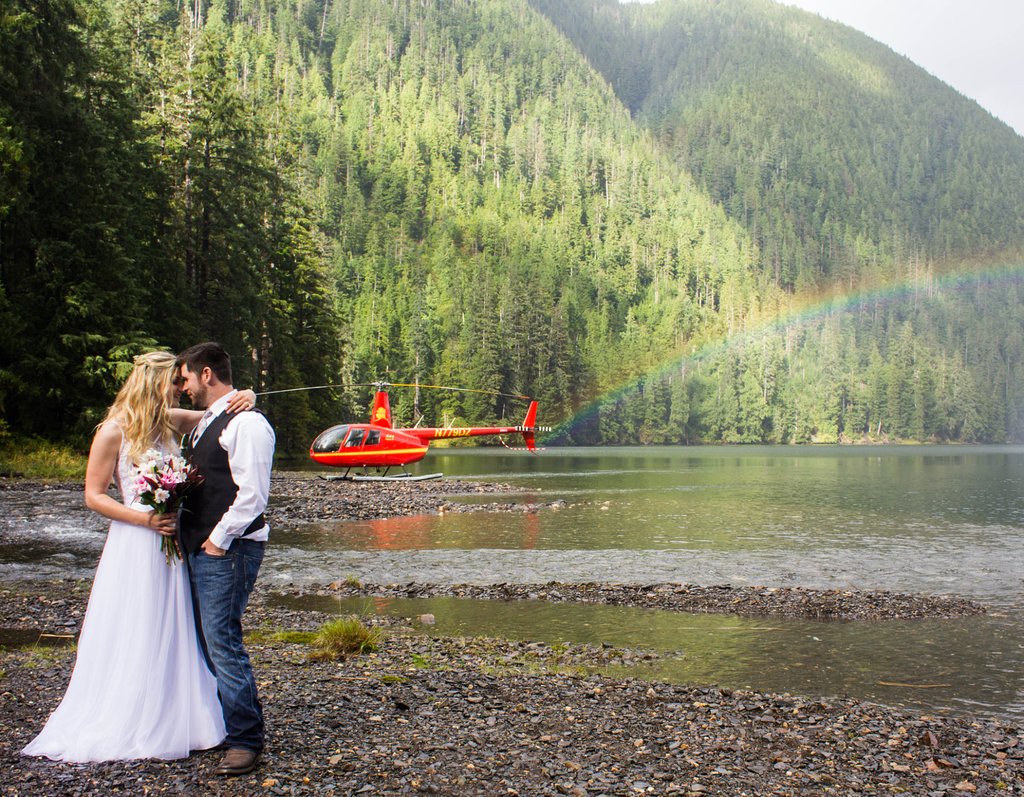 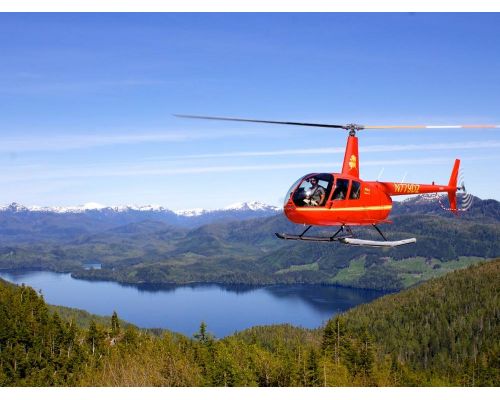 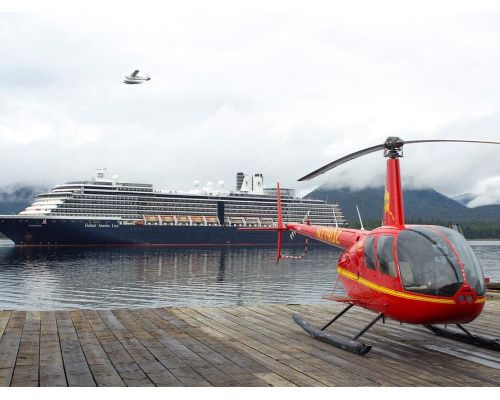 Rates $115 per person About us Helicopter Air Alaska offers a variety of scenic helicopter tours and charter services in Ketchikan during the... 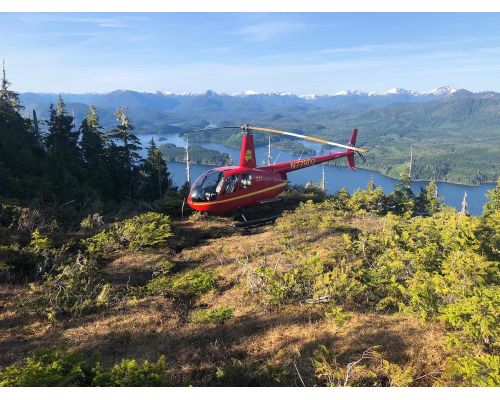 Top of the World Tour

Rates $189 per person About us Helicopter Air Alaska offers a variety of scenic helicopter tours and charter services in Ketchikan during the... 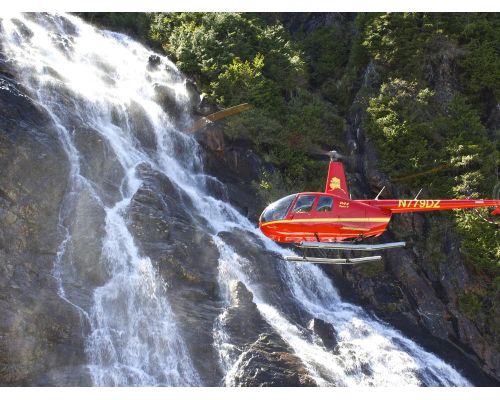 Rates $169 per person About us Helicopter Air Alaska offers a variety of scenic helicopter tours and charter services in Ketchikan dur...