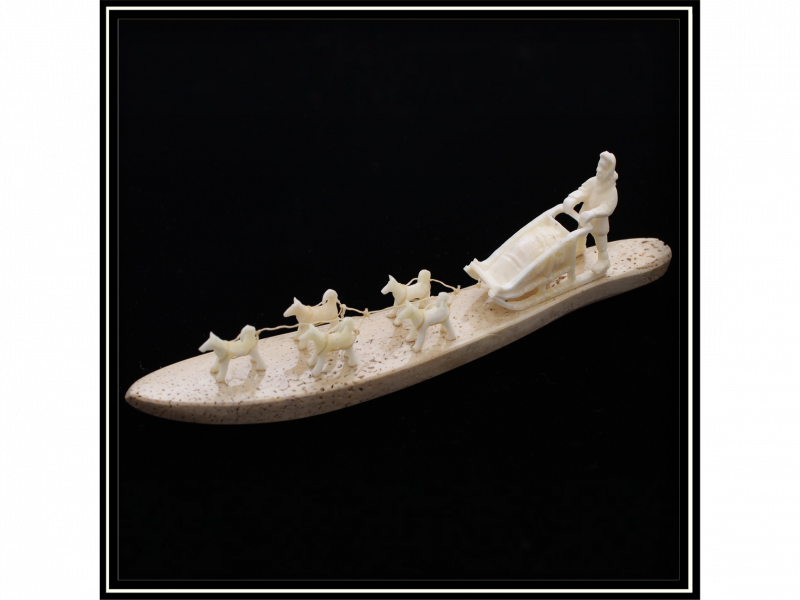 This dog team is carved out of walrus ivory by Native Alaskan carver Leonard Savage - Wasilla, AK. The base is Walrus Jawbone.

Due to the nature of the Ivory and bone, each dog team will vary in looks. There can be variations in size, shape, and color.

"Artists are neither born nor made, they bring themselves into being through an internal process of creativity forged in the crucible of experience"
-Leonard Savage, Alaska Native Artist

Through his artwork, Leonard Savage has brought into being a unique and highly personal account of his own life's journey. Born in the small village of Holy Cross, Alaska, Leonard experienced a childhood most of us can only dream of. Long summer days of never ending light, a young boy's heaven on earth for exploring the vast wilderness that surrounded this tiny hamlet on the mighty Yukon River. And equally long, frozen winters, with the temperatures staying at -30 below for weeks on end. Time to sit at home, listening to the Athabascan elders talk about the old days, when dog sleds and boats were their only means of transportation, and when the native language was still spoken.

But times were changing - fast. Leonard and his many brothers and sisters never learned their native language. The missionaries had convinced their parents there was no place for it in the "civilized" world. His older siblings were sent off to Oklahoma for schooling, further separating them from the traditions and culture of their parents and grandparents. When Leonard was twelve, his Father moved the family to Anchorage, to provide a "better" life for his family.

The culture shock was like a wall, one which Leonard and all his family struggled to climb. Now the culture of the modern, western lifestyle crashed headlong against the village way of life. No longer was he a part of a peaceful, welcoming world, Leonard was forced to assimilate into a world of low income housing, alcohol abuse and crime.

Through his teens years, Leonard struggled to determine who he was and how he was going to fit into this new scheme of things. That's when he discovered that it was his artwork that would help define his world. As a very young child, Leonard had enjoyed crafting all sorts of things - traps, toys, artwork, tools. He had long ago discovered that he was good at carving.

As a teenager in Anchorage, Leonard reached back to this part of himself and rediscovered his inner creativity. Looking for a traditional medium in which to express his culture and its traditions, he began carving bone, antler and stone, finally choosing walrus ivory as the medium best suited to his finely detailed carvings. Carved on such a small scale, Leonard's depictions of the wildlife which surrounded him as he grew up on the Yukon, are each a miniature part of his own life's journey.

In the delicate spread of an eagle's outstretched wing, in the muscles of a moose's shoulders as it faces the wolf, in the stance of the dancer as he reenacts the hunt, Leonard has brought himself into being, a small part living inside each work of art. And in order to share himself, his life, his culture and the traditions of his ancestors, Leonard has made his artwork available for all to experience, one small piece of that larger experience known as Alaska.